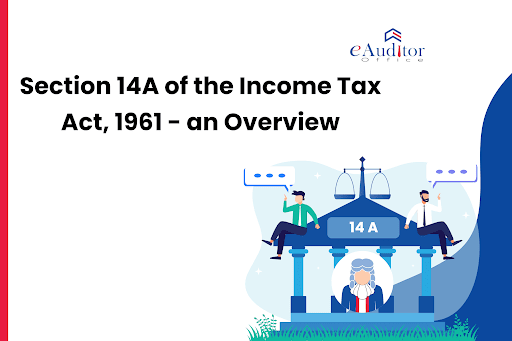 The Income Tax Act, 1961 provides for certain incomes that are not taxable or are exempt under the law. So, the taxpayers asserted that the expense incurred with regard to such exempt income should also be allowed as a deduction. However, the income tax authority believed that since the income is already fully exempt, the expenditure should not be allowed as a deduction. The authority objected that allowing the deduction here would reduce the tax on other taxable income as well.

The matter then reached the Court and Section 14A came into force in 2001 with retrospective effect from 1962. This was to provide clarity on the allowance or disallowance of expense incurred on exempt income.

What is Section 14A?

Sub section (2) and (3) of Section 14A further provides that the Assessing Officer shall determine the amount of expenditure incurred in relation to such income which does not form part of the total income under the Act if he, having regard to the accounts of the assessee, is not satisfied with

However, the amount referred above shall not exceed the total expenditure claimed by the assessee.

To understand the determination of the amount of expenditure under Rule 8D(2) more clearly, here is an illustration for the same:
Assume that Mr. Y took a loan of Rs 25 lakh at the rate of 10% interest on 1st January 2020. The loan was utilized for the purpose of various investments on which Mr. Y received a dividend. Dividend income is exempt from tax under the income tax act. The amount of interest expenditure incurred on the loan was Rs. 250000.

Determination of amount of total expenditure to be disallowed:

Computation of one percent of average of investment balances:


Section 14A Disallowance in the Absence of Exempt Income

However recently in Budget 2022, an explanation was proposed to be added to Section 14A which put an end to all the debates and controversies. As per the explanation to Section 14A, notwithstanding anything contained in the Act, the provisions of this section shall apply and shall be deemed to have always applied in case where the income not forming the part of total income has not accrued or arisen or has not been received during the previous year relevant to an assessment year and the expenditure has been incurred during the said previous year in relation to such income not forming part of the total income.

To put it in simple words, if during a financial year an assessee has incurred an expense of Rs 50000 in relation to an exempt income which has not been accrued or arisen or received during that year. Now, since the exempt income is not received during the year, section 14A would not be applicable. However, the explanation to section 14A comes into force in this case, Even though there is an absence of exempt income on which the expense of Rs 50000 was incurred, the expense will not be allowed as a deduction.

This explanation has its impact on the investment in agricultural land or partnership firms and various other revenues that are exempt under the law. However, it is not applicable to investments from which dividend income is earned by the assessee.